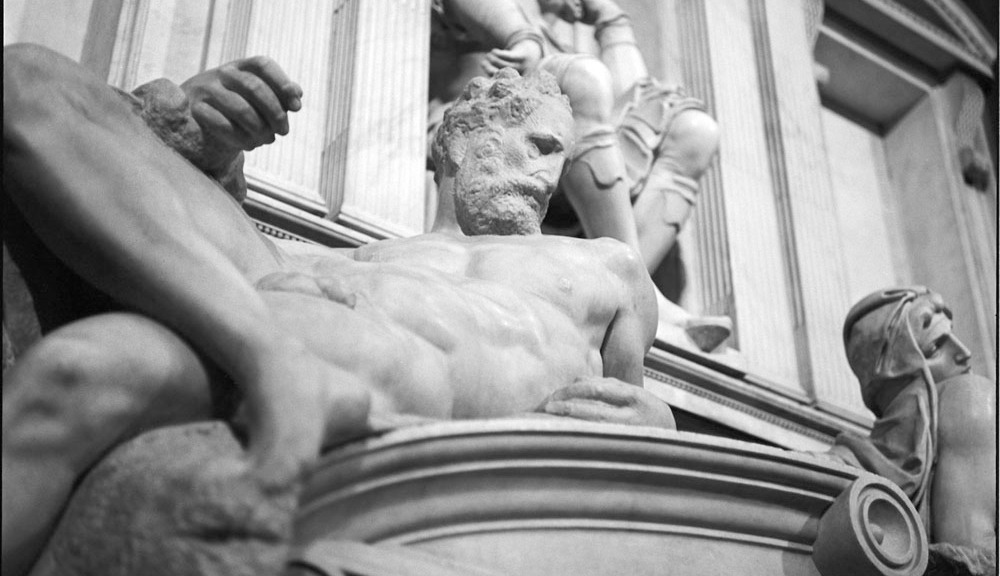 As promised in the previous post of the ceiling of the Sagrestia Nuova (also a Michelangelo design), here are the Michelangelo sculptures decorating the tombs of Lorenzo di Piero de Medici and Giuliano di Lorenzo de Medici. The great irony of this is that the greatest tombs in the Medici crypt go to the lesser members of the family – all the famous Medicis (Lorenzo Il Magnifico, Cosimo I, Guiliano, etc) are buried in the awe-inspiring-but-somber-and-over-the-top Medici Chapel, a giant domed octagonal chamber lined with dark marble mosaics and sarcophagi, or in the crypt below it.

The male figures of the tomb decorations both appear to be “unfinished”. While Michelangelo did leave Florence for Rome permanently before the sculptural figures were installed and all the tomb decorations complete, there is a debate in the art historical world about how “unfinished” they actually are, thus my use of quotation marks on the word unfinished. Michelangelo left behind enough sculptural works in rough form that some say he was really bad at completing projects, whereas others will argue that they are as finished as he intended them to be. Certainly his reputation as one of the greatest stone carvers ever to live has not been diminished by his “unfinished” pieces.