I came home from work today to find a wonderful pleasant surprise on my doorstep: Storytelling, by Alex Timmermans.

Alex is one of the modern masters of wet plate collodion technique. But far more than a mere technician, Alex is a true artist with a camera. His images are true creative narratives in a frame. 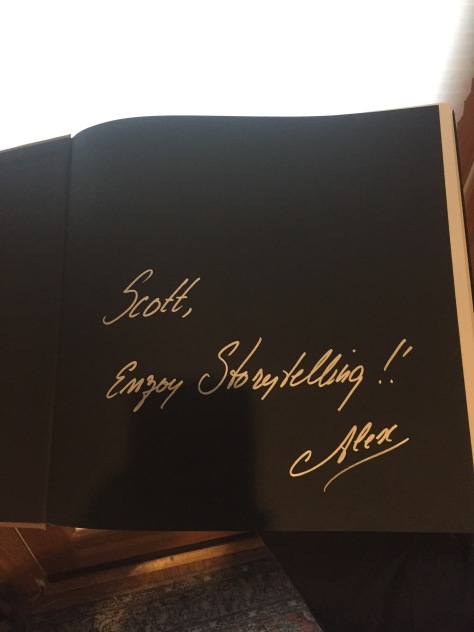 As another nice plus, Alex personalized it to me. I’m one of the credited backers in the afterword. I’ve had the great fortune to know Alex through online photography forums like APUG and Facebook, and watch this body of work grow and evolve over time, and now I’m thrilled to have his book in my collection.

While I was in Paris, I went to see a major exhibition at the Musee D’Orsay, Masculin/Masculin, a retrospective of the male nude in art from 1800 to the present. It was beautifully presented, almost overwhelming in size and scope, and extremely memorable. At the time, I thought about buying the catalog because it had outstanding reproductions of the work in the exhibit, including many works and artists I was unfamiliar with. I decided not to because of the size and weight of the catalog, especially considering that it was only available hardcover and my bags were already close to the weight limit. After I got home, I was kicking myself for not buying it after all. I got a second chance, however, when a friend who lives in New York told me he would be going in early December, and he offered to bring me back a copy. It arrived today, just in time to be a Christmas present to myself.

This got me thinking about museum exhibition catalogs. I generally try to buy them for exhibits I’ve enjoyed when I have the chance, because it serves as a reminder of the work exhibited, and it goes a long way to helping support the museum mounting the exhibit, especially when the museum (like all the galleries of the Smithsonian and the National Gallery of Art) does not charge admission. As a result, I thought I’d list the exhibitions I’ve collected catalogs from.

In rough chronological order, descending, they are:

*obviously I did NOT attend the Family of Man exhibit, as I wasn’t even a fantasy in my grandparents’ minds in 1955. But I do have the exhibition book.

Also note that I’ve listed where I saw the exhibit, not necessarily who published the catalog.

Perhaps the oddest is the Segnali di Fumo catalog, purely on account of the incongruity of going all the way to Milan, Italy to see photographs of the American West (well, I didn’t GO to Milan to see the exhibit, but happened upon it as I was leaving the Castello Sforzesco), with a significant body from the Amon Carter museum in Texas. Which I haven’t been to yet, but really ought to. It would also help close the loop on my France trip, for it is there that the first known photograph ever is held – Niepce’s first known heliograph of the view out his studio window at his estate near Chalon-sur-Saone (that I couldn’t visit because it was closed for the season). I’m sure I’m missing one or two from my collection, and my collection of catalogs is a pale shadow of the total number of exhibits I’ve been to either because no catalog was produced (producing an exhibition catalog is a major undertaking and not done casually or cheaply) or because I couldn’t afford it at the time.

Another day I’ll put together a catalog of my photography monographs, as I know this is of interest to some. It’s not a huge collection, especially in light of my overall library size, but it is a work in progress.

Well, everything is coming together, on time for once. I just picked up the new hard-copies of my Introduction to Platinum/Palladium Printing manual from FedEx/Kinko’s today. They look very nice. I hope the students will enjoy and appreciate them. It is 29 pages, spiral bound, profusely illustrated and with plenty of white space for note-taking. If anyone wants to buy a copy, email me and I can make the arrangements. They’re $30 each. Class is all set to run on Saturday, and I’ve even met a couple of my students already.

My picture frames for the Artomatic show arrived last night. It was a bit odd because the FedEx Ground guy not only left the packages themselves on the front steps, but he/she ALSO left a hang-tag on the door to tell me that the packages had been left on the front steps. Never you mind that you could barely open the front door to the house for the boxes; somehow I also needed to be reminded that the packages were there and needed to be taken in. Over the weekend I bought the paint for my wall – I got a gallon of flat black interior paint, that SHOULD be enough. My postcards are set to arrive on Friday – I’m getting antsy to see them!

I also had my first faculty meeting at Glen Echo Photoworks last night. It was very productive, and I’m looking forward to being a regular participant there. I’m especially psyched to find out that it is possible to arrange a human figure study workshop – given the general demographic at Glen Echo (there are lots of kids and kids activities there), I was concerned that they’d shoot it down, but if the studio sessions run at night, we should be fine!

I’m re-running the Intro to Platinum class in mid-October, and I’ll be doing the Advanced Platinum class in September. When I have dates finalized, I’ll post them along with a full course description here. Topics will include using digital negatives, printing in Platinum, advanced paper selection and handling, gum-over-platinum, fumed silica treatment and advanced contrast control techniques.

I wanted to put in a good mention for Richard Sullivan’s new blog, CarbonWorks. Richard is a brilliant photographer and photo chemist, co-founder of Bostick & Sullivan, the premier source for all things alt-process. I found his blog today and was reading up on some innovations he has discovered and published, including the Athenatype (a silver-based printing technique that yields a near-platinum print look) and a fumed silica treatment for alt process printing that helps boost dmax (maximum black density) a common shortcoming of many antique processes. Richard has been honored as a Fellow of the Royal Photographic Society for his work in reviving alternative/antique photographic processes and for inventing new variations on the same, specifically the Ziatype, a printing-out process variant on Platinum/Palladium. He is a master carbon printer (thus the blog title). He also teaches non-silver processes at Santa Fe Community College. Give the blog a read, and follow it if you’re interested in anything antique photo process related!

I just needed to put in a good plug for this book. It’s what I learned gum printing from, and contains some very useful information on other alt processes. The book is “A Non-Silver Manual: Cyanotype, Vandyke Brown, Palladium & Gum Bichromate with instructions for making light-resists including pinhole photography”. It was available for sale for many years in a soft-cover spiral bound edition directly from the author, Sarah Van Keuren. Mrs. Van Keuren has decided that she no longer wants to maintain the book and deal with the printing and shipping, so she is making it available chapter by chapter for free to download on www.alternativephotography.com If you want a hard copy, you can contact the publisher of AlternativePhotography.com and see about remaining stock.