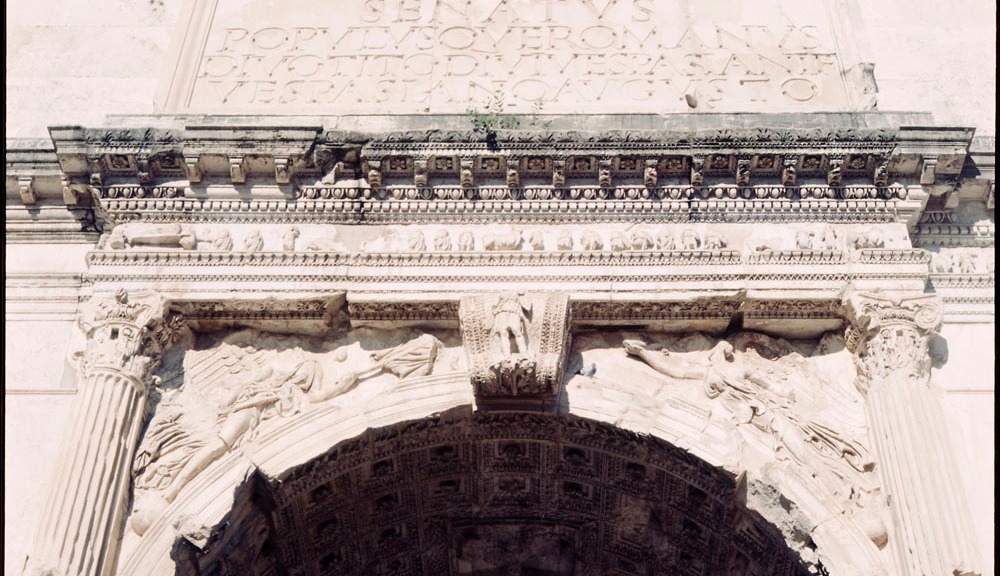 Many emperors had triumphal arches erected. Immediately beside the Colosseum is the arch of Constantine. The arch of Septimus Severus stands at the foot of the Capitoline hill, at the one end of the Forum. There are others scattered around the Empire, and of course, they inspired many later constructions, such as Napoleon’s Arc De Triomphe in Paris, the Soldiers’ and Sailors’ Arch in New York City, Wellington Arch in London, and the Arch of the General Staff Building in St. Petersburg. Ironically, the latter two were built to commemorate the Russian and English victories over Napoleon. This is the arch of Titus, at the opposite entrance to the Forum.

You can see the inscription which reads:

The Roman Senate and People (dedicate this) to the divine Titus Vespasianus Augustus, son of the divine Vespasian.

The arch would have originally had a sculptural group on top of perhaps horses and chariots, or perhaps the emperor riding a pegasus. The inscription would have been filled with metal letters in silver, gold or some other metal (bronze is possible but less likely as it would have oxidized and bled green patina over the face of the arch).

In the interior of the arch, you can see the spoils of war being brought back to Rome from the Temple in Jerusalem, particularly the golden Menorah. This was originally painted golden color, with the background blue. During a spectrographic survey of the arch for the Arch of Titus Digital Restoration Project in 2012 discovered the remains of yellow ochre paint in the menorah.