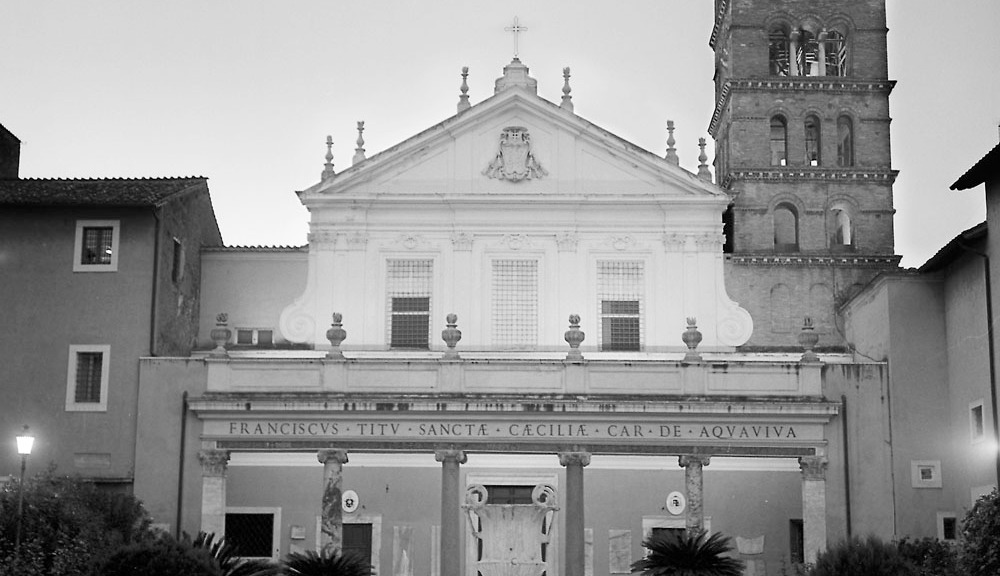 The Piazza dei Mercanti abuts the Piazza Santa Cecilia. In this view as the sun sets and the street lamps come on, there’s not much to see of the piazza itself from all the cars parked in it, but a very large restaurant faces it that does a bustling business on a warm fall evening. A neighborhood resident is out for a stroll, perhaps on their way to the coffee bar up the street.

Santa Cecilia’s courtyard remains open quite late into the evening, and the public can come and go through the gates. There has been a church on the site since the 3rd Century AD, when it was built over the location of St. Cecilia’s house. The main body of the church dates to the 13th Century, and some 9th century mosaics are preserved within. The facade and the courtyard are 18th century renovations, however.

This cherub keystones the arch over the main gate to the courtyard.

Inside the courtyard you can view the 18th century facade of the church, ancient mosaics and an ancient cantharus or water urn that now is the centerpiece to a fountain. The bell tower dates to the 12th Century, and looms over pretty much the entire neighborhood. Here young couples sit on the edge of the fountain to canoodle while admiring the church before wandering off to dinner or perhaps a more appropriate intimate location.