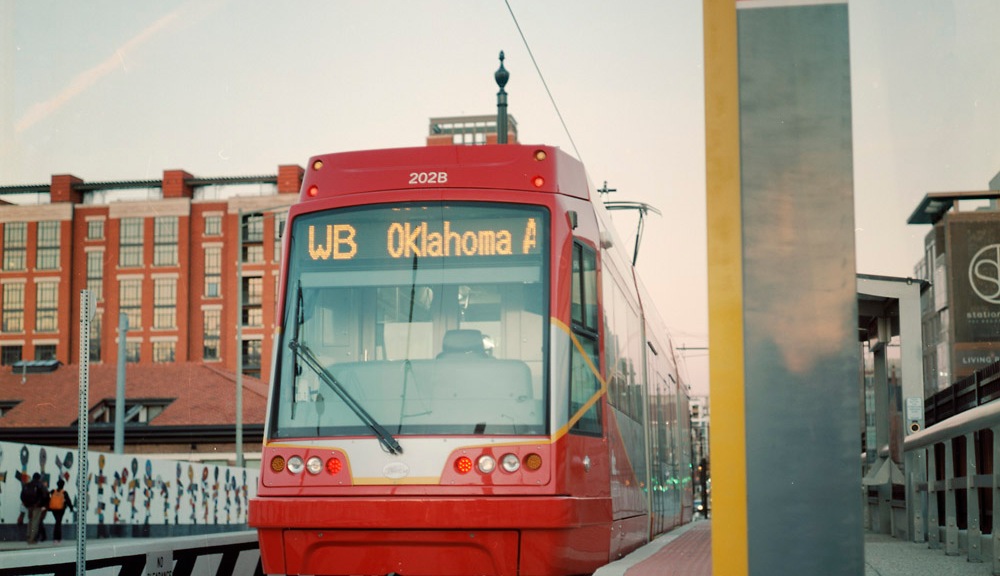 I’m a big public transportation junkie, so when I heard they were finally launching the DC Streetcar on H Street Northeast (a public works project over a decade in the making and long overdue – the tracks have been in place for two or three years now), I was so excited I ran over after work last Friday to see it and ride it only to find out I was a day early! So I satisfied my urge and photographed the streetcar at the Union Station end of the line, catching it at sunset. The shiny new car reflected not only the setting sun but the buildings across the street, bringing the surrounding urbanscape out of frame back into the picture.

Here is a different view of the streetcar, waiting at the Union Station end of the line, looking down H Street. H Street was, fifty or so years ago, a thriving business district catering mostly to a middle-class African-American clientele. Then along came the riots after the assassination of Martin Luther King Jr., and then with the 1980s, the cocaine and crack epidemics. H Street was devastated.

Obviously now, not so much. It has transformed starting in the early 2000s with the real estate boom. Perhaps the turning point was the creation of a large condominium complex, Senate Square, on the grounds of what was originally a Catholic school and later the Capitol Children’s Museum. Now, pawn shops and lake trout joints are being replaced by artisanal coffee roasters, fancy pubs serving British-Indian fusion cuisine, and cultural outlets like the Atlas Theater and the Rock n’ Roll Hotel (which is not a hotel, but a bar and concert venue). Instead of a Murry’s, the neighborhood is now sporting a Whole Foods.

When finally fully operational (at the moment, the streetcar only runs less than half the length of installed track), the streetcar will connect Union Station and the governmental core of the city to east of the Anacostia River, a long-suffering neighborhood where good jobs and access to quality goods and services have been sorely lacking.