Here are three recent additions to my optical glass arsenal. First is the perhaps most interesting of them – an R. Beard Daguerrian lens made by T. Slater, London, Ca. 1855. It’s the oldest lens I have, and probably the rarest, most exotic one. The back story is that when Daguerre announced his invention to the world in 1839, he got the French government to buy the license and pay him a lifetime pension. A similar offer was made to the English government but they refused, so Daguerre entered into negotiations with a private citizen in the UK to license the Daguerreotype. The first licensee sat on his rear about it, and in short order, a more enterprising individual, Mr. Beard, bought out his interests. Due to a quirk in English patent law, Beard was entitled to represent himself (as you can see in the inscription on the lens) as the sole patentee of the Daguerreotype (when in reality he held an exclusive license, and the right to sub-license to others). Beard insisted that anyone buying a license to the Daguerreotype process from him had to mark EVERYTHING with “R. Beard, Sole Patentee”, including things like frames and cases for images, and as we can see here on the lens, lenses and cameras too! This one is made by T. Slater, Optician. Mr. Slater was an optician in London, today better known for his telescopes than for his camera optics. This lens is probably a Petzval design, and from what I can tell, it just about illuminates a 5×7 inch plate. Useable coverage is probably quite a bit less than that.

This next piece is my Voigtlander Petzval. If you pay any attention to such things, you’ll probably have heard people geeking out about Petzval lenses, especially in wet plate collodion circles. Petzval lenses are named after their inventor, and are famous for providing a relatively fast lens (very important when working with wet plate where the approximate ISO hovers around 1). They’re also coveted today for their notable defect, a pronounced curvature of the plane of focus. This gives the “swirlies” that you see in many wet plate images today.

Voigtlander was an Austrian/German lens manufacturer and an early pioneer in photographic optics. This lens is from approximately 1864, and is an 11 inch f3.4. To give you an idea of the size of this thing, the front element is 80mm in diameter, the barrel is 6.5″ long, 8″ if you include the lens hood. It weighs in around 2kg (4.5 lbs). The funny looking tab sticking out the side is a Waterhouse stop – an early mechanism for aperture control that relied on flat slips of brass with varying diameter holes cut in the center.

Last but certainly not least, is my Taylor, Taylor & Hobson Cooke Series II 10.5″ f4.5 lens. This one is not nearly so old as the other two, dating from approximately 1914-15. This one came to me in rather rough form, but it will live again to make more pictures after the thorough cleaning I gave it. 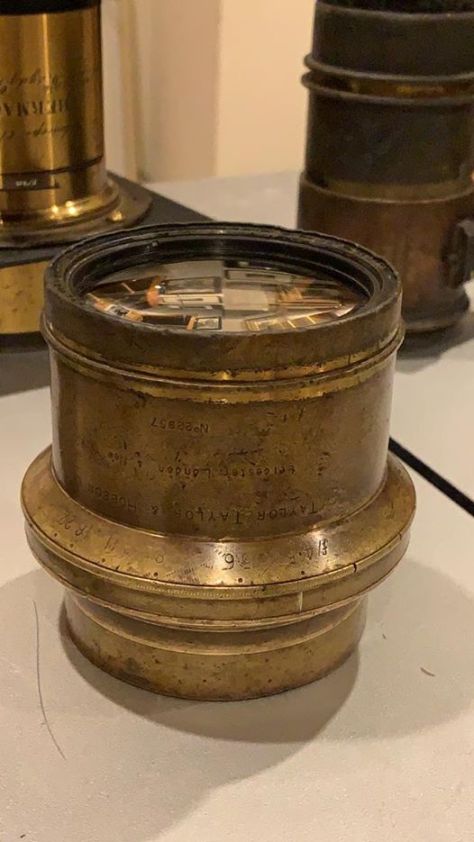 Lurking in the background behind the Cooke is my Hermagis Eidoscope #3 – it’s an 11 inch f5 lens, and most specifically a soft-focus lens. You control the soft focus effect by changing the aperture. The larger the aperture, the softer the effect, the smaller, the sharper. It’s actually a Rapid Rectilinear design, not a Petzval, which some people think that it is because they think that all brass lenses are Petzvals. The Cooke is neither a Petzval nor a Rapid Rectilinear, but rather an Anastigmat, but it too has a reputation as a soft-focus lens, the soft focus being controlled by the aperture, and also by adjusting the spacing on the front element. On the small Cooke lenses like mine, there is no official soft-focus mechanism, but on the bigger, longer portrait lenses, they had a ring that you could turn to adjust the soft-focus effect. Some enterprising individual took it upon themselves to engrave some marks around the front of the barrel to indicate where to turn the front element for soft focus effect. Once I have this lens mounted, I’ll give their markings a try and see what it does.