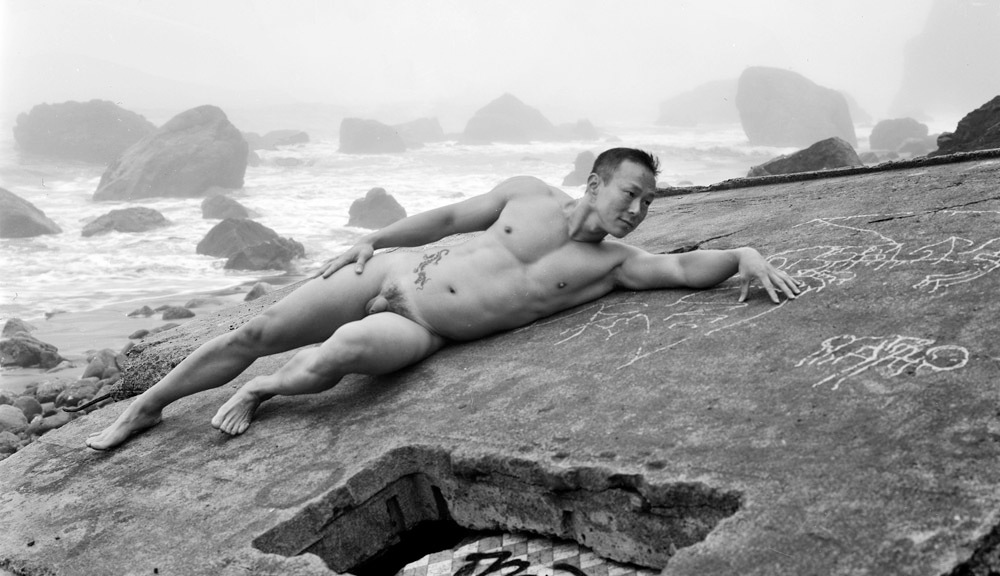 Four more images from my series with K.T. at Land’s End. It’s funny how when you’re shooting, sometimes you’re so in the moment of doing it, you don’t realize the parallels you’re creating. In this first pair, the parallel is obvious.

We had an interesting space to work in, so I had him turn and repeat his pose both front and back. I was thinking of exploiting the cubic volume of the collapsed structure, and contrasting the rectilinear forms of the structure with the organic ones of the body.

The reclining poses are similar as well, but in a less obvious way because the backgrounds are different, as is the placement/emphasis on the figure. In the tree figure, the human form is front-and-center, definitely the main subject of the image. The coarseness of the bark and the wild gnarls of the branches contrast with the contained, orderly, smooth human body draped over them. In the surfside image, the human figure is very much present, and the focal point around which the image is structured, but it blends in to the scene both tonally and formally.

Last but not least, I thought I’d make a diptych out of the two foyer shots, since they so harmonize with each other. I know I wasn’t thinking “Gee, let’s make a diptych out of this!”, or at least not like THIS, when I took them. Back when I took these, I thought almost exclusively as a single-image shooter. Each image was a discreet entity, even if part of a narrative series. So I certainly shot them to be a pair, but I would have envisioned hanging them side by side in separate frames. Funny how serendipity works, isn’t it? 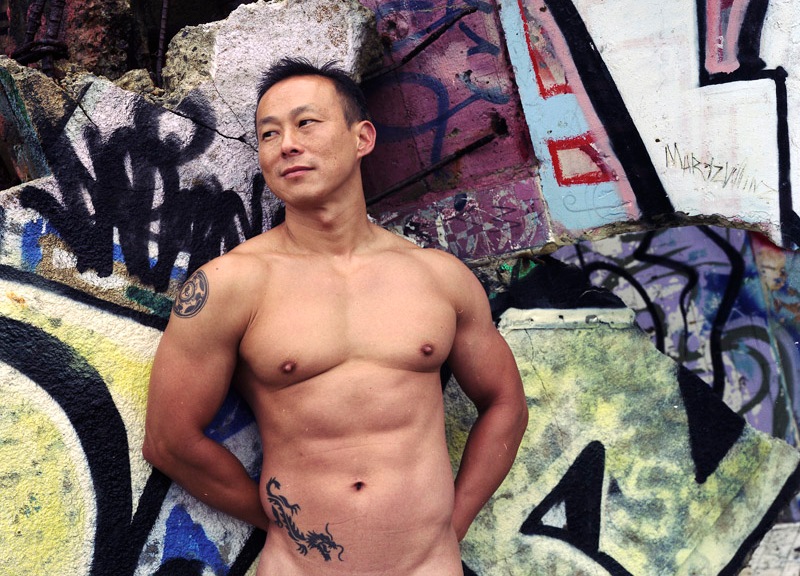 I’ve been doing a lot of housecleaning. I’m preparing what used to be my old office (the computer is now in the library, aka the second bedroom) to become the “camera room”. I have all the shelves I need, I just have to clear out some more stuff and get rid of the old computer desk I used in that room. In the process of cleaning it up, I found a whole bunch of old negatives that I hadn’t done much with. I had tried scanning some of these in the past, and had issues, but I think that was as much my old scanner and my old scanning software that couldn’t handle them as well. These two images were some of the rare color nudes I’ve done. I’m not entirely sure why I don’t do more color nudes – I think there’s a mental association with color nude work and shall we say “non-artistic” photography. I think it’s much harder to do a good color nude because it becomes so hyper-realistic that we start to look at the model not as a model, but more as a portrait, and as such we start personifying the models rather than seeing them as abstract everymen and everywomen.

These shots can’t be duplicated – the graffiti-covered structure (which used to be part of a military guardhouse overlooking the entrance to San Francisco Bay) has since completely collapsed into the sea and/or was removed by the Army and/or Golden Gate Natural Recreation Area rangers for being tragically unsafe. Quel dommage – it made for a really cool backdrop. These are two survivors from that excursion, and proof that checked-baggage x-ray scanners are indeed hazardous to film (thus the difficulty with scanning and color-correcting them).

K.T. was a great model to work with. You can’t see it from these shots but we were out photographing in full-on San Francisco Golden Gate fog. Which is COLD. And WET. But he bravely got out there on the crumbling concrete in the sand and the wind and the fog with nothing but his birthday suit and posed. I think we worked for about 2 hours. Yes, he did have a bathrobe to slip in and out of between shots, I’m not that cruel. I’m going to try and coax him into posing again for me a good 10+ years on from when these were taken.

I’ll be following these up with a batch of black-and-whites I did with the same model at the same location. One of the great things about San Francisco is that public attitudes toward things like (respectful) nudity are so relaxed. Although the location looks very isolated, we were just perhaps 60 feet down a cliff from a well-traveled footpath, inside the city of San Francisco proper. I was shooting on this same beach another time, that day being a rare sunny day in SF, and my model was standing next to a rock in the surf, naked as the day he was born. Out from between two sheltering rocks comes a rather grungy looking tennis ball, hotly pursued by a Golden Retriever. Who is shortly followed by its owner. We don’t have any time at all to react, and my model has no way to cover up. The dog’s owner pauses for a second, surveys what we’re doing, says, “nice day for it!”, smiles and walks on after the dog.