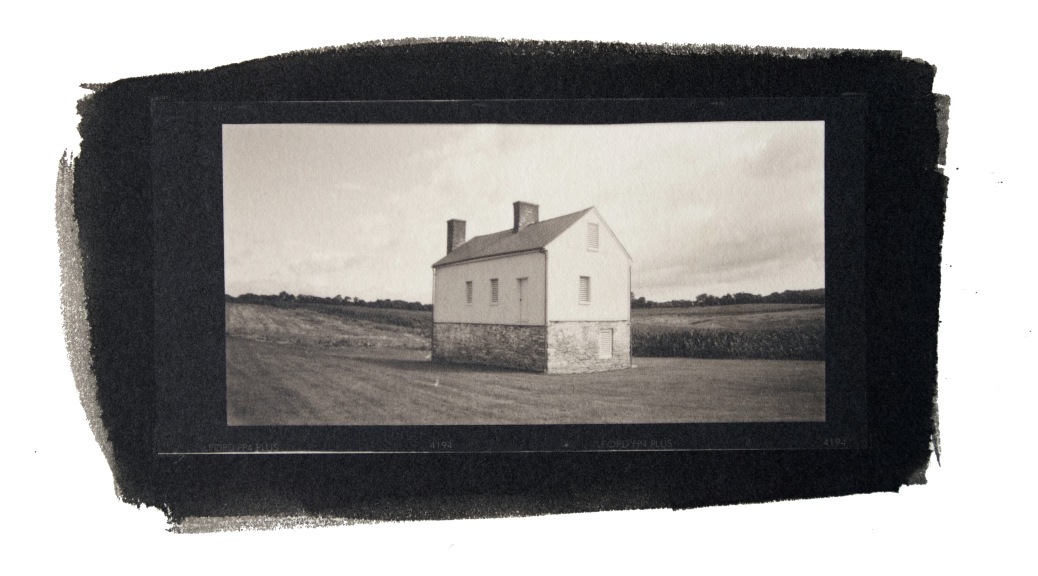 My work from the Sinister Idyll series is appearing in the next issue of The Hand magazine, a monthly journal of reproduction-based art. This covers hand-made photography as well as most forms of traditional printing (woodcut, linocut, etching, collotype, and more). 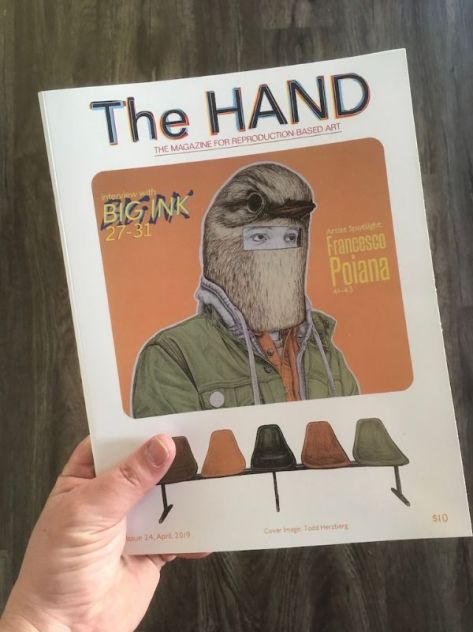 Issue 24 is in the distribution room. We are trying our hardest to get them in envelopes, stickered and bundled for the mail room!
Hey all!
We’re working hard to get your copy sent out early this week. After they are shipped, delivery can take up to 10 days, or longer outside the US. We hope you’re excited to get the magazine and we are confident it will be worth the wait!

This issue features an interview with Lyell Castonguay. Lyell is the director of the large-format woodblock press, BIG INK, and an accomplished artist in his own right. We also have an Artist’s Spotlight on Francesco Poiana. If you haven’t ordered yours yet, GET A COPY TODAY!

Below, you will see images by the artists we featured on our social media platforms over the past week. Please join us on Facebook and Instagram for more behind the scenes pics and fun stuff. We hope you will take the time to take a closer look at these wonderful artists. Please click on their links, go to their websites, and start a dialogue with them. Take care of yourself and each other. 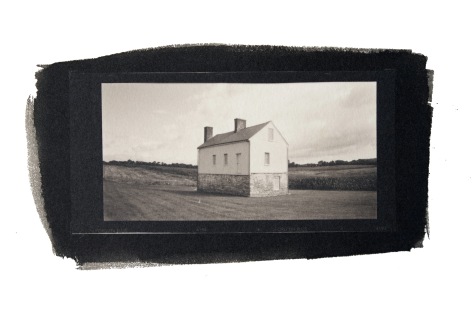 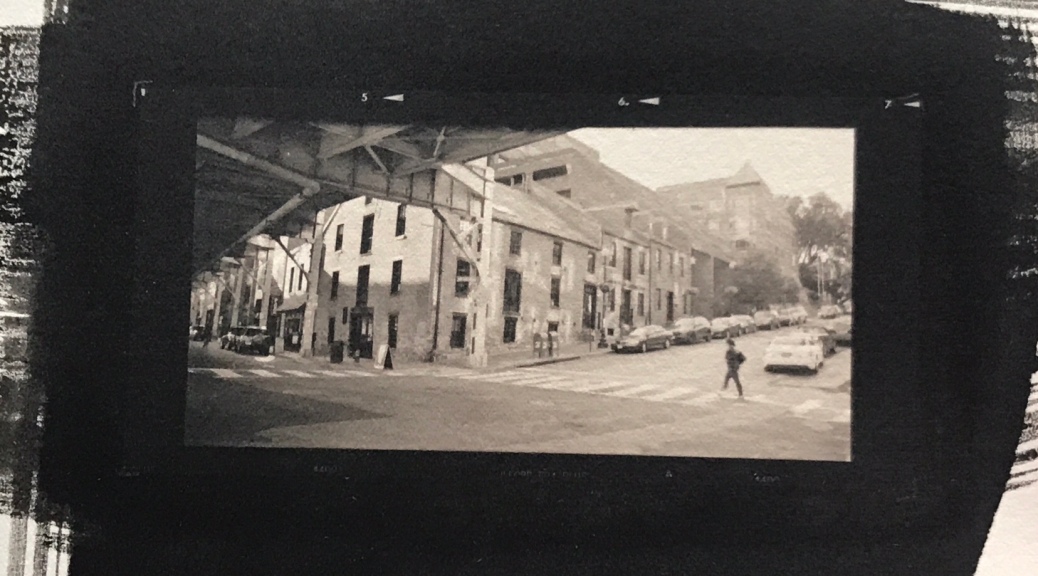 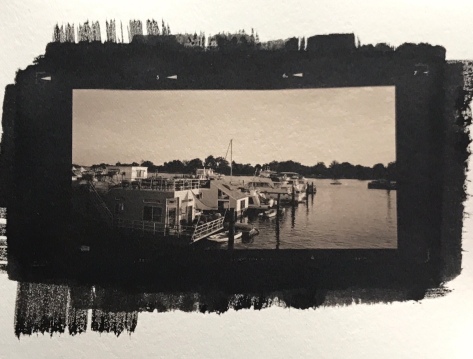 Today this is a marina for pleasure boats. In 1848 it was a working dock that admitted directly onto the Potomac River, and was the site of the largest non-violent slave escape attempt in US history, the “Pearl Incident”, when 77 individuals attempted to flee down the Potomac river and through the Chesapeake Bay with the intended destination of New Jersey, a free state. Their efforts were thwarted by contrary winds on the Potomac and betrayal by a fellow slave who did not join them. 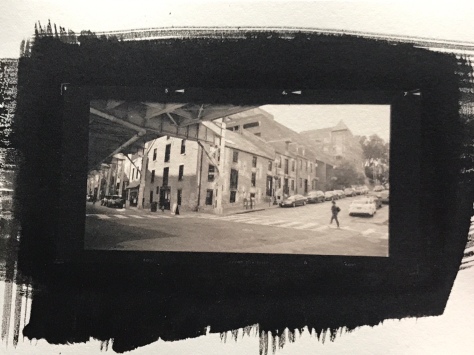 These warehouses in Georgetown today house businesses, a tavern and boutiques, but at the time of the Pearl Incident were tobacco and grain warehouses owned by Mr. Dodge, the man who owned the leaders of the escapee contingent.

The net outcome of the Pearl Incident was the ending of the slave trade in Washington DC in 1850, but full abolition of slavery and legal emancipation would have to wait until 1862. Along the way, the captain and first mate of the Pearl spent four years in prison because they could not afford to pay the fines ($10,000 in 1848 currency, or about $250,000 in today’s currency). 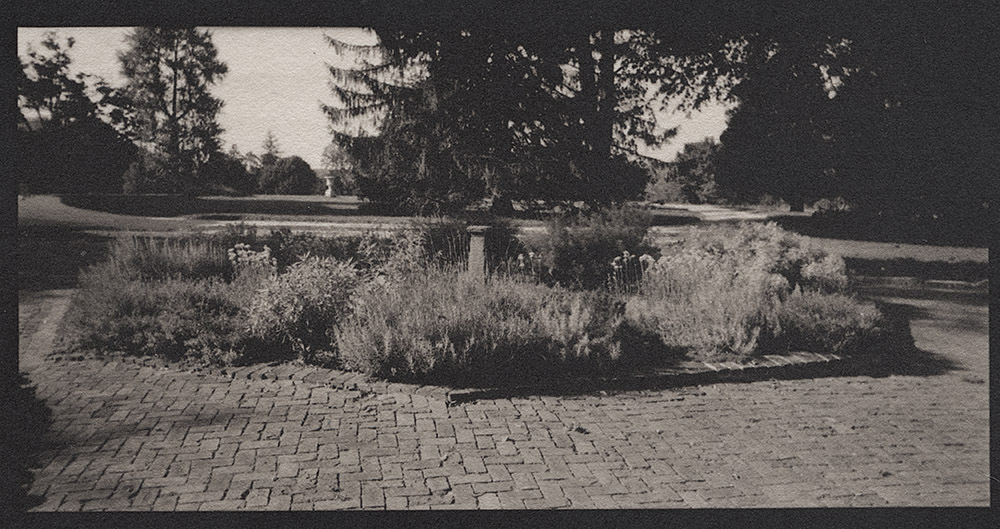 Here are the first two from my visit to Hampton National Historic Site, in Towson, Maryland (just north of Baltimore). More will be forthcoming, but I wanted to get these two posted right away. Hampton was at its peak, a several thousand acre estate. It was built as the country home for the Ridgely family, who made their early wealth through ironworks. One Ridgely would be governor of Maryland. The house itself was famous for being a centerpiece of entertainment and gracious living, having greenhouses and a subterranean icehouse on the property, providing the Ridgelys and their guests with seasonal fruits, ice water and chilled beverages year-round, an extreme rarity in 1790 when the house was built. The main house has thirteen bedrooms on three floors, a sitting room, great hall, dining room, parlor, library/music room, kitchen and laundry.

This octagonal garden, roughly 8 feet on a side, is built inside the foundations of the house slave quarters. It was a two-story structure, and some three families of house servants shared it. While the US Park Service guides (who give outstanding tours of the property) tell you explicitly about the structure and its purpose, no marker in the garden indicates its history.

Today, Hampton Lane divides the Hampton historical site. What is remarkable about the property is that so many of the farm structures remain – the dairy with its spring-water-fed cold water bath for the milk and butter, the horse stables (the Ridgelys were big horse racing fans, and kept the stables within eyesight of the mansion, another unusual feature, as well as a no-longer-surviving racetrack of their own), the overseer’s house and slave quarters for the skilled labor (stable hands, dairy workers, etc).

You can see the overseer’s house inside the white picket fence to the right of the scene. Hampton is open as a public park, and many people come there to ride their bikes and exercise their dogs. Today it is a beautifully maintained pastoral landscape in suburban Baltimore. While again, the Park Service does yeoman’s work in interpreting the space, and has provided outstanding documentation on the website for Hampton, the interpretation of the site requires you to actually go inside the structures and talk to the park service guides. It is possible to visit, and if you don’t engage, be completely oblivious to the fact that the parkland you are walking through exists by and for slave labor. 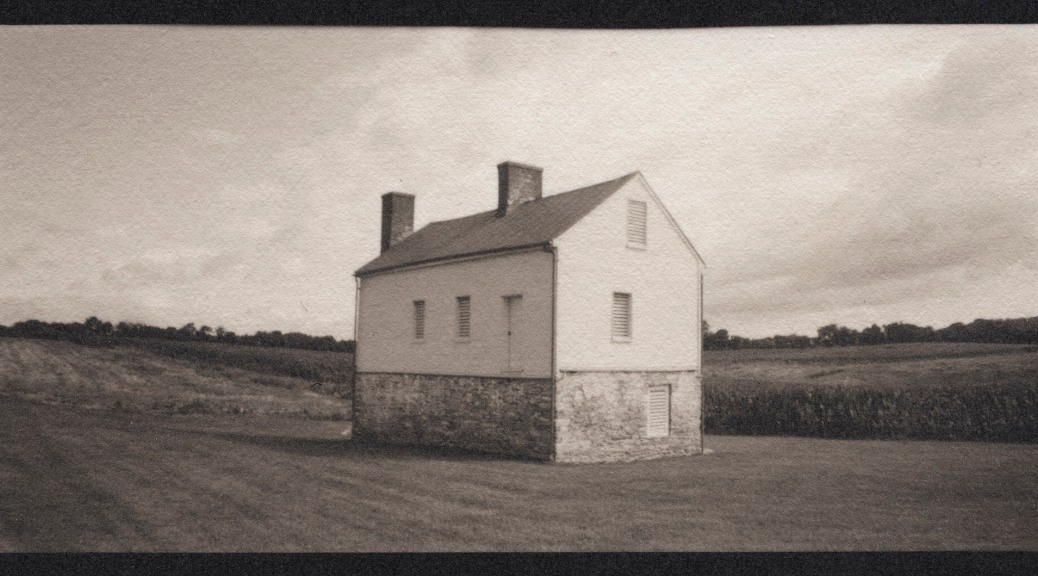 This series of images are what inspired my current project – Sinister Idyll. Sinister Idyll as a title came about from standing on the Best Farm property at the Monocacy National Battlefield monument outside Frederick, Maryland, and seeing the beautiful summertime landscape of rolling hills covered with cornfields, knowing the horrors of American slavery that were practiced on the property. At the end of the 18th century, the Vincendieres, a French Creole family fled to Maryland from Haiti to escape the slave revolts.

Headed by a woman, Victoire, they re-established their plantation life outside Frederick, Maryland, on a 750-plus acre property they called L’Hermitage. At their peak, they owned some 90 slaves. This was an extraordinary number – across the Potomac River, Oatlands plantation had 120 to work 3500 acres. It is not known why they had so many slaves as records of their business do not survive, and they may have been trying to cultivate labor-intensive crops such as tobacco. What is known, however, is that they were also operating a stud service – slave breeding for hire – and that their own methods for treating their slaves were harsh enough that the sheriff was called to their property multiple times by neighbors on complaints about cruelty and mistreatment of the enslaved population.

This building is the Bachelors’ House, a secondary dwelling for the young men of the family to live outside the main house until they married and started their own property and family. Today it presents an idyllic scene, but on the ridge behind it and to the right was the location of three slave cabins, each not much different in size to the Bachelors’ House, but housing roughly thirty people per structure.

This is the corn crib on the Best Farm. It is called the Best Farm today, rather than L’Hermitage, because the last family to operate the farm was the Best family – they leased the land from 1863 into the 1990s. The corn crib is another site of slave labor in an otherwise bucolic landscape. The stone barn you can see in the background would have housed farm animals and machinery. It is a far better, more sound and protective structure than the cabins where the slaves would have lived. You can see the shadow of the big house intruding on the foreground, much as it would have loomed over the lives of all the enslaved population.

If the stone barn gives you echoes of northern France, you’d be correct – architecturally it is styled after the structures of the homeland of the Vincendiere family. It is one of the oldest stone barns in Maryland, if not in the US. There is a tremendous sense of irony that a structure styled after the home of freedom of thought and equality of mankind would be the site of barbaric enslavement. There is also a tremendous irony in such a property being operated in such a way by a woman in the first decades of the 19th century, when such things were highly anomalous at best.

Today this field grows rich with corn. Clear blue skies and puffy white clouds cap the scene. In 1862, in this cornfield, a turning-point of the Civil War almost happened. Robert E. Lee’s army had camped here, on the march to Antietam. Left behind was a copy of General Orders #191, which detailed Lee’s plans. It was found wrapped around three cigars, abandoned in the camp. Delivered to General MacLellan, they practically handed him Lee’s army on a platter. As usual, MacLellan failed to follow up completely on this intelligence coup, and the end result was the single deadliest day in U.S. military history with some 22,000 dead, wounded or missing, and a war that would drag on for three more long, bloody years.

I have chosen to photograph these scenes in panoramic format because the wide aspect ratio emphasizes the landscape surroundings and provides a context for the structures and places. I purposefully chose to print them as very small contact prints to force intimacy with the subject – to view them you can’t hold yourself at a remove and distance yourself from the context – the echoes of slavery on this landscape are very much still with us if we stop for a moment to look and listen. I am printing them in palladium because the warm tone of the image evokes a certain historicity of the scene, reminding you that these hidden scars upon the landscape and the soul of the country are eternal.

My plans are to continue this project on locations throughout the Washington DC metropolitan area and expanding beyond as time and budget permit. Next up, Sully Plantation.