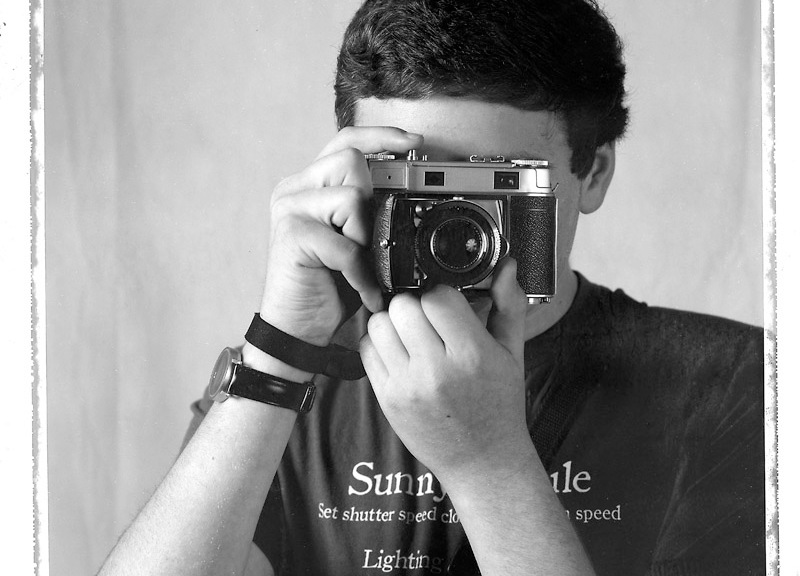 This weekend was the next-to-last session of the Intro to Large Format Photography class I’m teaching at Glen Echo. As a treat, I broke out some of the last remaining sheets of Polaroid Type 55 I have in my personal stash. We had a lot of fun setting up portraits and posing for each other. One of my students even brought along his 6×17 panoramic camera and took a couple frames of all of us in the studio together – a couple were serious, and one was very silly (I gave someone next to me bunny-ears).

We covered the fundamentals of not only how to use a view camera for portraiture (movements – not many – focusing, bellows extension factor, lens selection) but also basic studio lighting. Given that we were limited on time and had lesson objectives to cover, I dictated the lighting setup with just a main and a fill, driven off my Calumet Elite 2400 W/S unit. It’s a lot of power for just 4×5, but I wanted to give people a real studio experience (that and the moonlights I would have used that are at the school are at the moment buried in the storage closet under dozens of boxes from the exhibits currently hanging in the gallery space).

We rigged a softbox on the main light and an umbrella on the fill. The softbox was camera left, and the fill was beside the camera. I used a 240mm Docter Optics f9 Apo-Germinar as my lens because the focal length is a nice one for studio portraiture (not too long, but not too wide either), it’s mounted on a lens board to fit my Sinar (some of my other portrait lenses are on different lens boards), and the shutter has good working flash sync (some of my other portrait lenses are in archaic shutters that don’t have reliable flash syncs – and yes, I’ve had them overhauled but they still don’t work 100% of the time). f9 is a bit dim for a traditional portrait lens, but I think this one produced outstanding results (further confirmation that that lens was a phenomenal buy and well worth every penny).

Polaroid Type 55, for those who are unfamiliar, was an instant film that produced both a positive print and a re-useable negative. Artists have loved the negatives not only for the incredibly fine grain and sharp detail, but for the artifacts at the edges that the Polaroid process produced. It hasn’t been made since 2008, so any Type 55 anyone is using is old stock. There is hope on the horizon for a replacement as a group called “New55” is creating their own improved version. One of the challenges of the original Polaroid Type 55 was that the negative film and the print were not equally sensitive, so you had to decide if you wanted a good print or a good negative – a good print gave you an underexposed negative and a good negative gave you a washed-out print. New55 will have one advantage over the old stuff – the instant print and the negative will be speed-matched so you won’t have to expose for either a good print or a good negative.

I can tell from the negatives that my Type 55, which outdated in 2006, is starting to get a little long in the tooth, as they have begun to lose some contrast. I’ve tweaked it a fair bit in Photoshop to get these negative scans to look good. I’ll try printing them in the darkroom and see what I can do with them – they may print much better than they scan.

Here are some behind-the-scenes shots, taken by one of my students.

One thought on “Intro To Large Format Class – Portraiture Session”