This was the sunrise that greeted me this morning. What a beautiful way to start the day.

The last of the High Heel Race images from this year. Attending is fun, especially to see all the creativity that gets put into the outfits, most especially from the teams who invent a group theme costume. I swear there are some that start planning next years costume the day after this year’s race, like the fast food themed group or the Washington monuments group of a couple years ago. 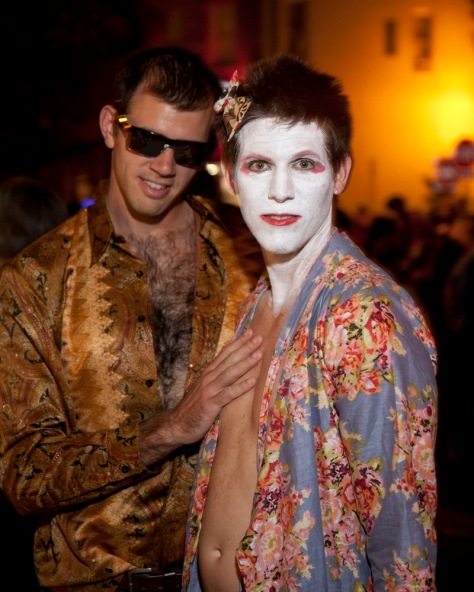 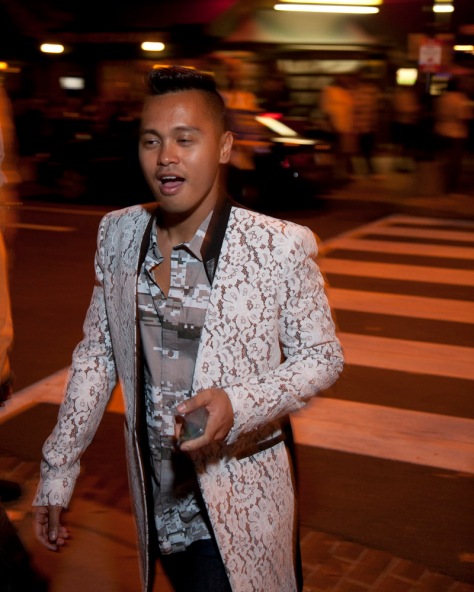 One of the most enjoyable parts of attending is the joie-de-vivre of the participants AND the attendees. These women were having a grand old time on the patio at Fox and Hounds. They also actively solicited me taking their photo. 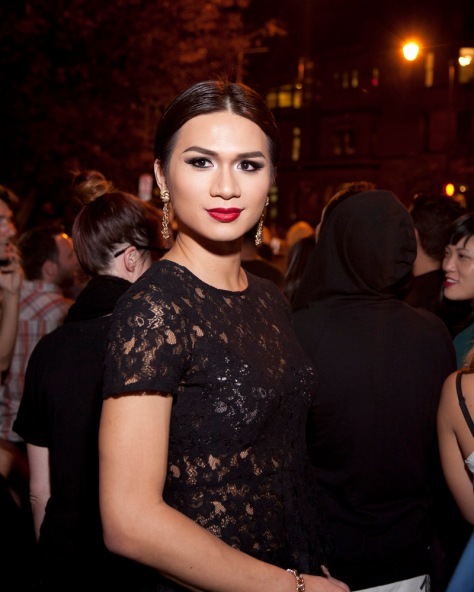 This lady also wanted her photo taken, and was directing me to take the picture of the drag queen in the photo above: “ooh, did you get her? You have to get her! She’s beautiful!”. Her boyfriend/husband was actually not so thrilled with the idea of being photographed, but when he heard it was not going to be in the newspaper, he relented. You can tell, though, from his expression here it was very much HER idea 🙂 .

One thing that is getting very frustrating about photographing the race, though, is the organizers. I realize they have a tough job to do, to keep a very large, and by the time the race kicks off, very drunk crowd under control. But for those of us not blessed with traditional media connections to obtain a press pass and for whom one of the primary reasons for attending is photography, they’re becoming killjoys. The organizers seem to be losing sight of the fact that this is a fun, free-spirited, countercultural event and that being control nazis and bullying photographers is just really uncool. You want good press, let us do our thing and we’ll reward you with great photos and great write-ups about the event. Keep stepping on us and we’ll stop coming, stop taking pictures, and stop showing the world what kind of fun event this is. .

Again, not so many words needed.

Now that is some FIERCE hair! 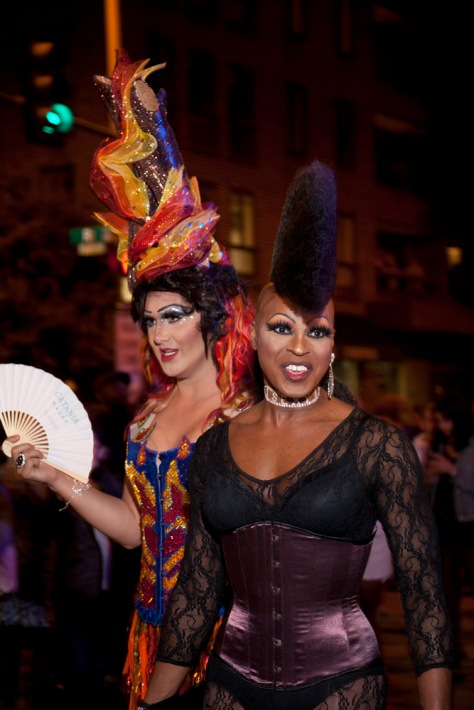 She reminds me a bit of Divine post-Atkins diet. More than enough polyester pantsuit to go ’round.

The devil/angel made me do it!

Would you call this “masculine glamour”? 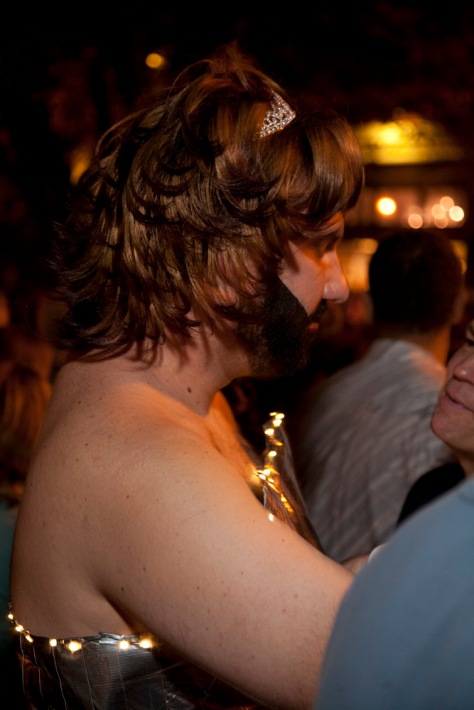 Overheard: “We have an ‘unconventional’ relationship…”

These guys actually asked me to take their photo!

While the race seems to largely be a young man’s (or is it woman’s?) sport, it’s nice to see some gentlemen of a certain age participating, proof that it’s all in the attitude.

The complete MMRF crew posing in a line, showing off their “assets”. 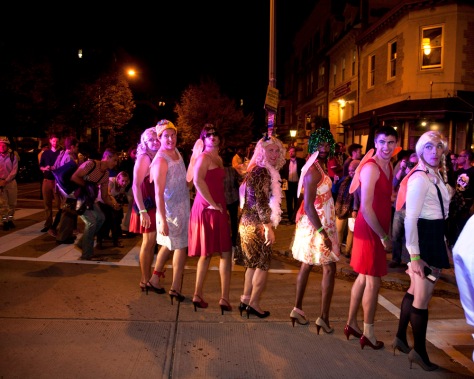 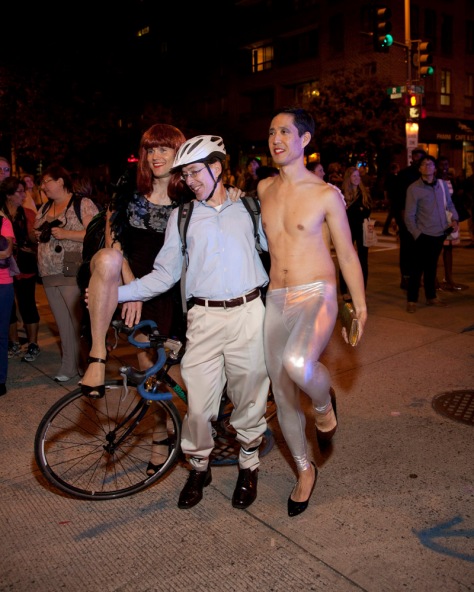 It’s FLO! Can I get a discount double-check? 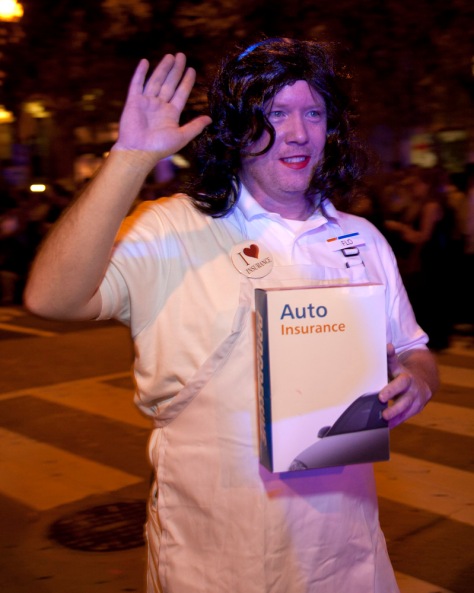 The Fanta girls made a comeback this year. Here two of them are mock fighting over their flavors. (see my pic of them in 2012 here)

The higher the hair, the closer to… oh my god. 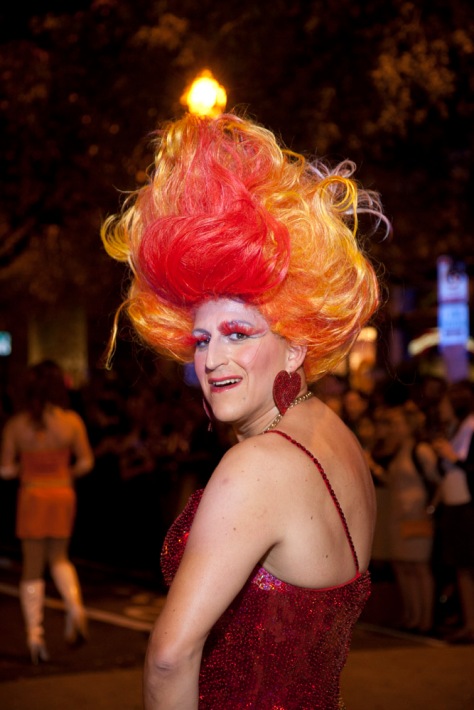 Don’t forget that safe sex can be fun… if you tear the dress getting it off, it’s ready to do double-duty!

Now that I’m in to the thick of posting the HHR photos, I’ll let the photos speak for themselves for the most part, and just indulge in a little occasional snark about the subjects as the spirit moves me. Ergo:

Doesn’t the guy on the right look kind of like a young Val Kilmer in drag? Back when Val Kilmer didn’t look like a liver sausage. 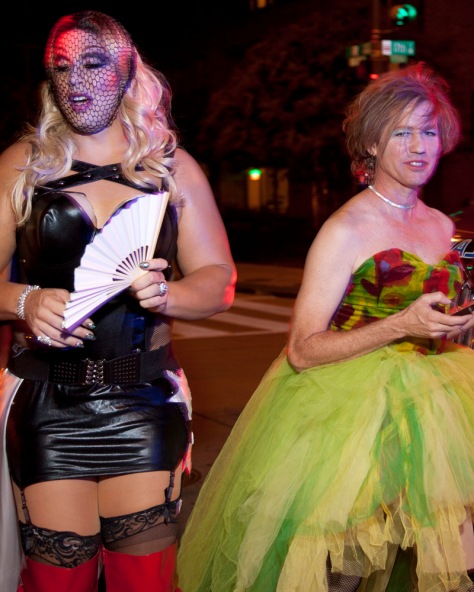 I think you could caption this one, “rescue me”! 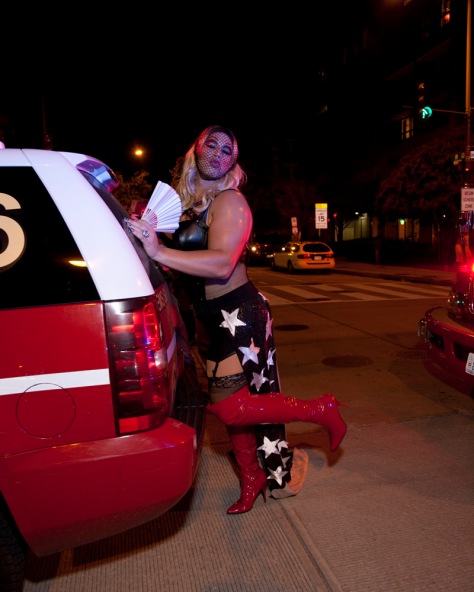 I think someone was interpreting the giant christmas tree/butt-plug on display in Paris. 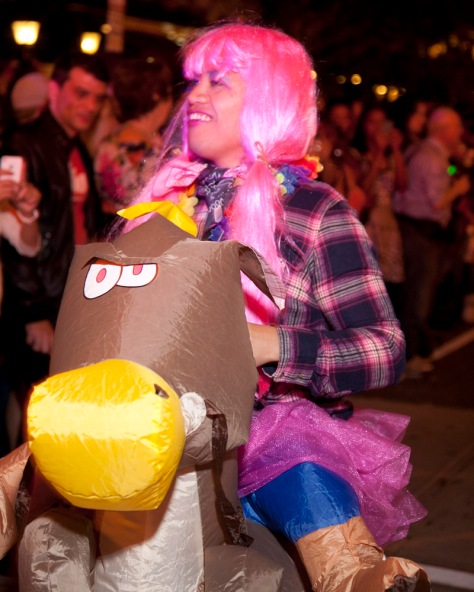 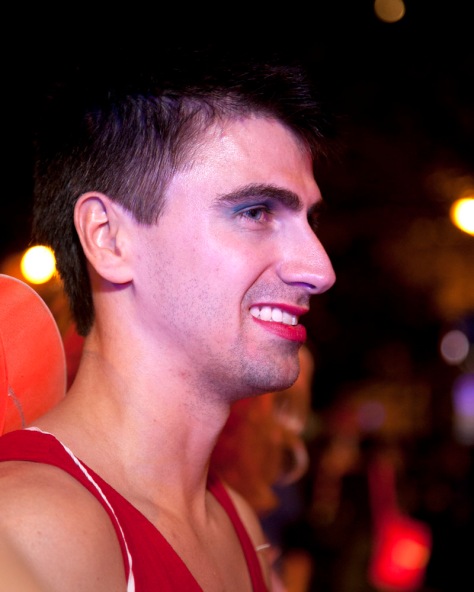 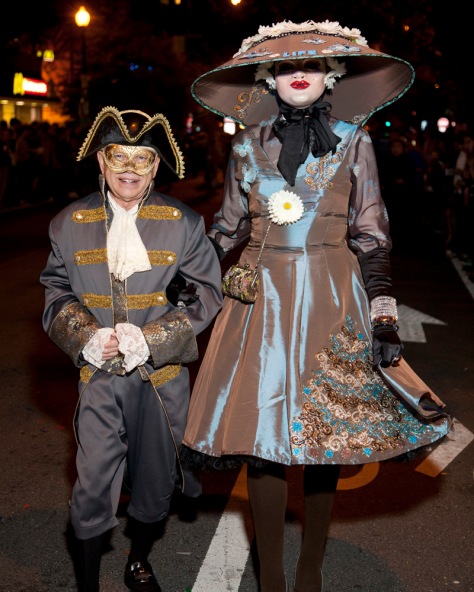 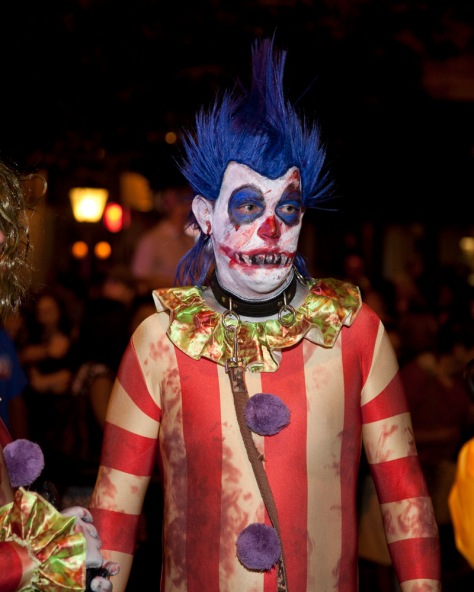 To indulge in a little more technical info about the photography itself, I’m using a Gary Fong flash modifier which looks a lot like a frosted tupperware container whose lid is suffering from mid-life belly sag. Regardless of the appearance, it’s truly the best flash diffuser I’ve tried. It does a fantastic job of softening cast shadows from the flash and spreading the light more evenly, which is a huge plus when shooting in an environment like the HHR – outdoors, at night, under street lamps. 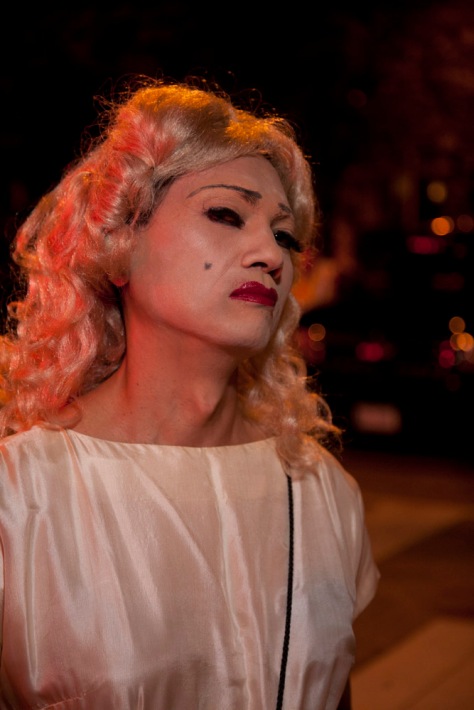 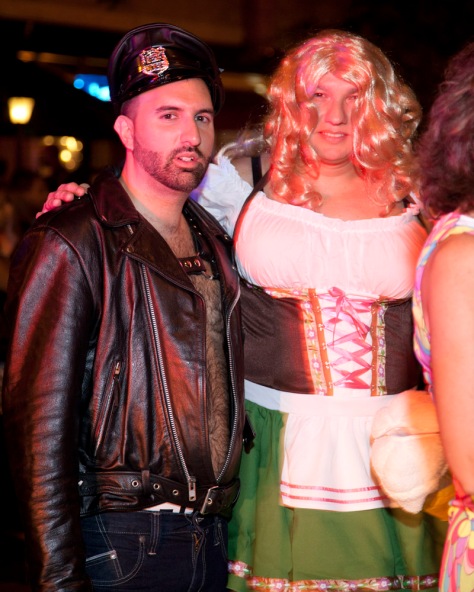 Church Ladies at the Races!

This poor little tourist lady I don’t think quite realized what she was getting herself into when she asked to have her picture taken with a drag queen.

There are actually a lot of straight men who participate in the High Heel Race. Here’s one who is obviously a first-timer in heels, resting his feet before the big event. He was part of a group of friends participating to raise awareness for a friend of theirs who was competing in an ironman/ironwoman contest to raise money for the Multiple Myeloma Research Foundation. 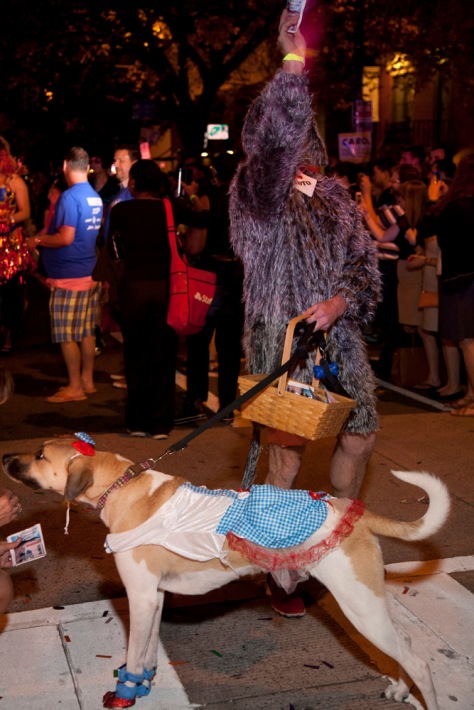 Who knew Angry Birds did drag and drank their liquor through a straw?

Last night I went to the annual High Heel Race in Dupont Circle. It’s a tradition in DC going back to the mid-80s of taking over several blocks of 17th Street, getting all tarted up in the finest (and I use that term extremely loosely, as you’ll see) drag, sashaying up and down for two hours to see and be seen and get lots of attention, culminating in a thirty-second flurry of activity as men in heels and outrageous costumes RUN three blocks.

I’m going to deviate a bit from my standard protocol in posting these and instead of arranging them in logical or thematic groups, I’m just going to post these as a stream-of-consciousness bit in the order in which they were taken. It gets a little overwhelming to manage so many images. Maybe after they’re all posted, I’ll come back through and do a separate “best of” post edited down to a top ten or so. 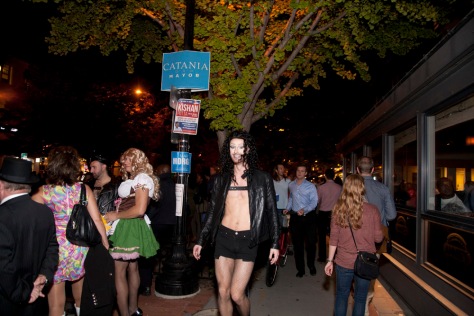 I’ve seen Cruella deVille here before at past Races and/or in the Pride parade. 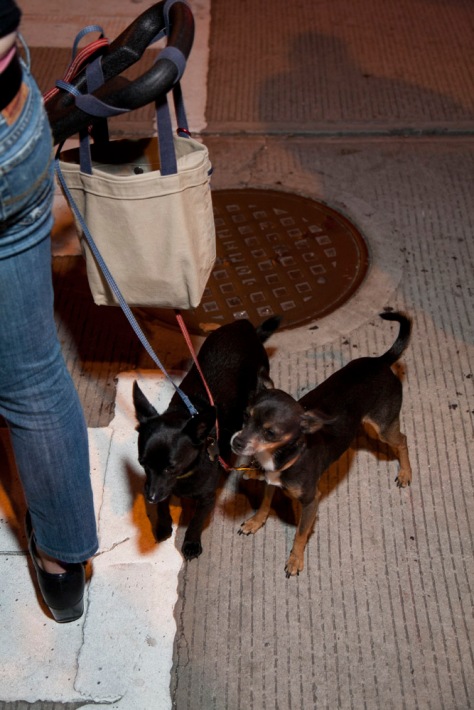 Miss Tina Turner says, “You better be good to me!” 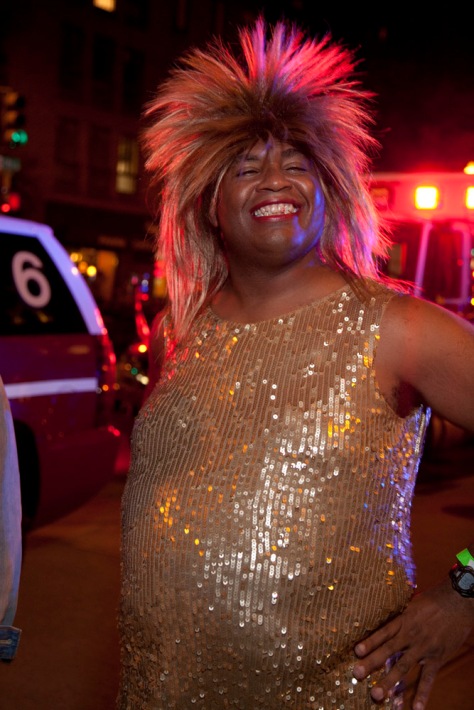 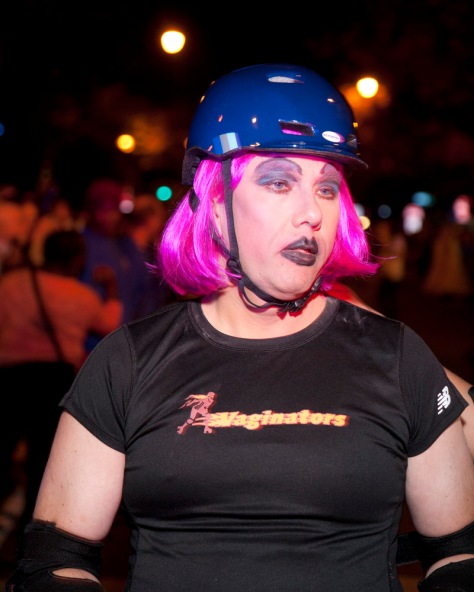 The “husband and wife” were celebrating their Virginia gay shotgun wedding to commemorate the instatement of Marriage Equality in Virginia thanks to the federal courts.

Even one of the Nationals’ bubblehead mascots got in on the fun.

This shoot was a bit of an equipment test, as I had bought an external lithium-ion battery for my flash to test out. The battery is a Bolt brand Cyclone PP-310 battery (I ordered mine from B&H, but you can also get them through Amazon, but I don’t think there’s actually any savings at one over the other). It will provide up to 500 full-power flashes on a single charge. I know when I was shooting the Mummers’ parade in Philly a couple years ago, the combination of the sheer volume of shots (I think I took around 300 pics) plus the cold weather really put a strain on my flash and the batteries were failing partway through. I didn’t want to have that happen again, so I invested in this Bolt external battery pack, which can be clipped to my flash bracket or worn over my shoulder on a strap. Being able to keep the battery in a coat pocket would be really helpful in cold weather.

Anyway, the battery performed flawlessly – I shot over 100 images last night, and it barely put a dent in the battery’s capacity. It was still showing four out of four power levels at the end of the night. Another plus- I was expecting it to be heavy, as I remembered the old Quantum batteries that used lead-acid batteries being noticeably heavy, even the small capacity one, but it almost feels like an empty plastic shell, the battery is so light. It’s quite the contrast to the rest of the rig (Canon 5D with vertical grip, Stroboframe flash bracket, 580EX II flash, off-camera TTL cord, and Canon L 24-105 f4 zoom lens).