Sometimes, I do actually break out the 35mm and shoot. These were all taken at a local car show, playing around with my Contax RTS III and the 50mm f1.4 Planar lens. I think you really can tell a difference between shots taken with the RTS III and other 35mm cameras because of the vacuum film pressure plate – sucking the film perfectly flat at the time of exposure does lead to a sharper negative overall, or at least takes the film’s flexibility out of the equation and lets the lens shine through. These were taken with my favorite color negative film, Kodak Ektar 100.

I just love the simplicity of the Corvette rear end design in this composition – the field of cream yellow, offset by the curve of chrome and the two red taillights reflected in the bumper. It doesn’t get much better than this.

Aah, classic design. The Art Deco glory that is the Cord 810 convertible. Considering how rare and expensive these are, the owner/driver gets a lot of credit for driving it to and from the show. I saw him later that afternoon, pulled over with the hood up, so that dashed my fantasies of having one as a daily driver. But it’s still a glorious car to see on the road today.

Another vintage dashboard, from a Porsche 356. Very clean, very simple, no clutter to distract from the driving experience.

I was racking my brain to remember what car this was exactly. It’s British, 1950s, with a big (for the time and place) engine. I was thinking Jensen, or BRM, but I think Jensen was 60s and 70s, and BRM mostly did racing cars. Then it struck me – it’s a 1950s Bristol four-place coupe. They were fast, luxurious GTs in their day, and somewhat rare, especially on this side of the pond.

Here is the engine compartment of the Bristol. A big inline 6-cylinder topped by three magnificent carburetors. It’s almost sculptural.

The modern contingent – a Ford GT, the modern recreation of the 1960s GT40 race car, but this one is street legal, and fully civilized on the inside with working A/C, radio, and leather seating.

And last but not least, what car show would be complete without a Ferrari or two? This is the dashboard of a Ferrari 250 Berlinetta, as seen through the window glass.

As previously mentioned, I didn’t have much need for automotive transportation in France. But I did get to see some very cool cars at both extremes of the spectrum. 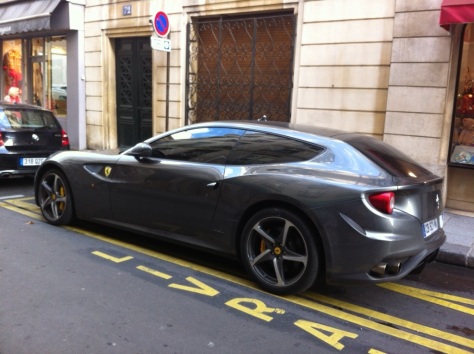 With its yellow brake calipers: 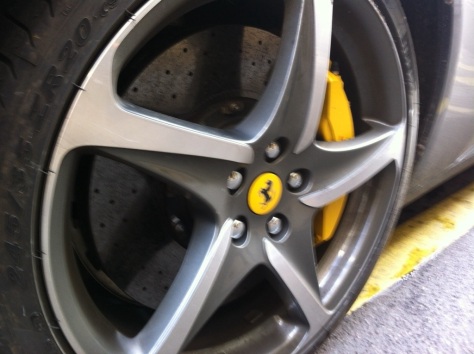 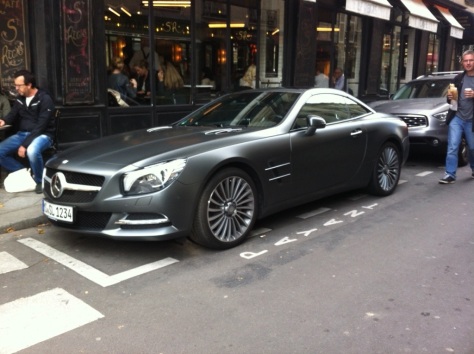 And at the opposite end of the form-vs-function/performance-vs-economy spectrum, there were the Lib’aire electric car sharing cars:

And this funky Renault tandem in-line two seater that could park on the sidewalk it was so narrow.