This trio of Lotus seed pods might look a little odd to those in the know- they’re not exactly in their native habitat. I was wandering the trails at Kenilworth, saw these three had fallen while still full of seeds, and picked them up to make a still-life. I re-planted them in the muddy bank of a lily pond to create this grouping.

This cat-o-nine-tails at full fluff presented itself to me at the edge of another one of the ponds.

I finally got around to scanning and uploading these shots from Kenilworth Aquatic Gardens I took back in the waning days of summer. Now’s the perfect time to bring them out as it’s descending into freezing temperatures here, as a reminder of the golden light and radiant heat that we love to complain about while we’re in the middle of it, but deeply miss when it’s gone.

If you’ve been reading my blog for any length of time, you’ve seen me post other photos (and the odd video!) from Kenilworth. If you’re at all a fan of aquatic plants, Kenilworth is well worth the visit, as they have acres of lily ponds, lotus plants, cat-o-nine-tails and other species that grow in wet and marshy environments. In addition to the flowering plants, Kenilworth is a great place to go for wildlife – everything from dragonflies to frogs to turtles to herons and even supposedly a beaver family can be found there. And the amazing thing is that it’s not only in the middle of a city, but in the middle of a rough part of the city. Enter the gardens and you think you’re in some vast national park riverine oasis, not three miles as the crow flies from the United States Capitol building.

As seen in my neighborhood. Wheat-paste cutouts are becoming a new form of eco-friendly/sustainable/non-destructive graffiti. In this one, Kim Jong Un’s face has taken up residence on the wall of a building near the 9:30 Club.

A sidewalk in Georgetown on M Street, with the waning sun going down and casting very long shadows on a late summer evening. I’ll leave it to you to figure out why the title is “69 Seconds”.

This was from the weekend before Labor Day, when it was still hot, the sun stayed up longer, and it still felt like summer wasn’t going to end. This boy was playing in the fountain at the Georgetown riverfront park. He stepped out to take a break and basked in the sun to dry off. I can remember that kind of in-the-moment joy of lying on a warm rock after swimming in cold water, just being there and experiencing it, without a thought for the past or the future. I need to do that again some time, soon. 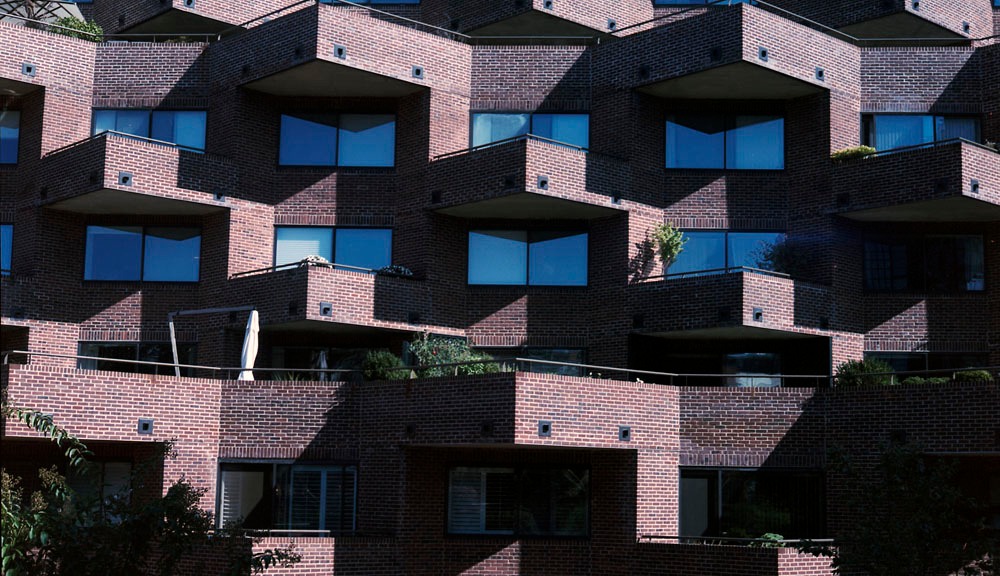 Two very similar shots of the same building. One in soft, diffuse light, the other in strong directional light. While both are about repetition of shapes and patterns, the one remains representational, the other, abstract.

And the difference between these two shots is about two hours. They were taken on different, but weather-wise similar, days, but one was taken around 4pm, the other around 6pm. 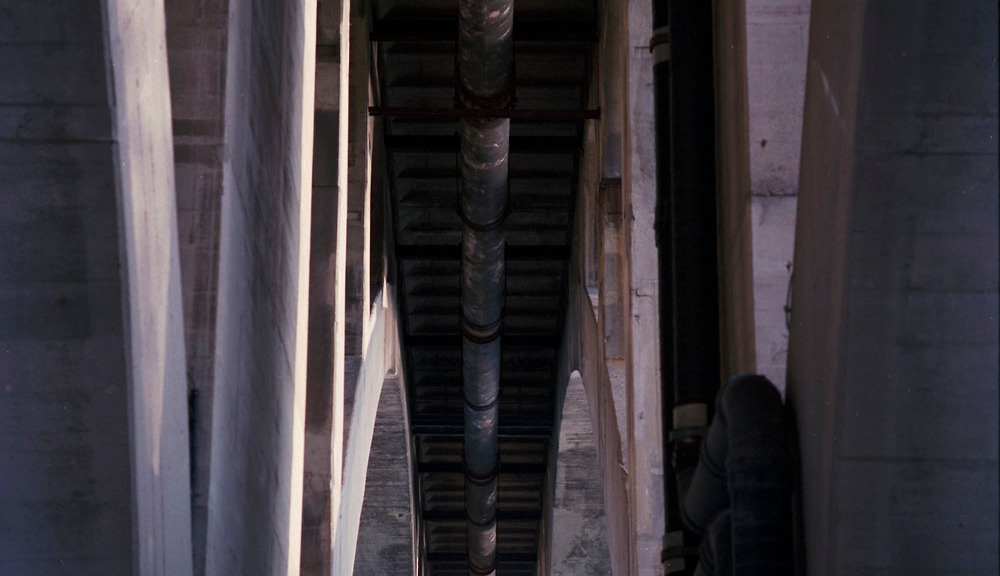 Key Bridge is one of the most iconic structures in Washington DC and a major attraction in its own right. It spans the Potomac between Georgetown and Rosslyn, and carries a tremendous volume of traffic between DC and Virginia every day.

The view of the underside is one most people never get, of this or any bridge for that matter.

Key Bridge is chock full of strange hidden nooks, like this service door to something in the infrastructure. Despite being sealed off behind chain-link fencing, people have managed to get in and graffiti it.

The prototypical view of Key Bridge, from the West side. I’m fascinated by how someone managed to get to the bottoms of the piers and graffiti them. You’d have to either have a boat, sail up to the foot of the pier, then climb up 20+ feet from the waterline, or somehow rappel down from the pedestrian deck of the bridge. Not a recipe for success on either front, as I’d imagine you’d be spotted very quickly and arrested.

Here’s a view of the underside where the bridge crosses the C&O Canal.

This is the tower of the old Trolley Barn, which used to house the streetcars that plied DC in the late 19th/early 20th century. Now it is office space on the upper levels. The view is from under Key Bridge, where the on-ramp to the Whitehurst Freeway (really just an elevated bypass to get around the street traffic of Georgetown) splits off of Key Bridge. 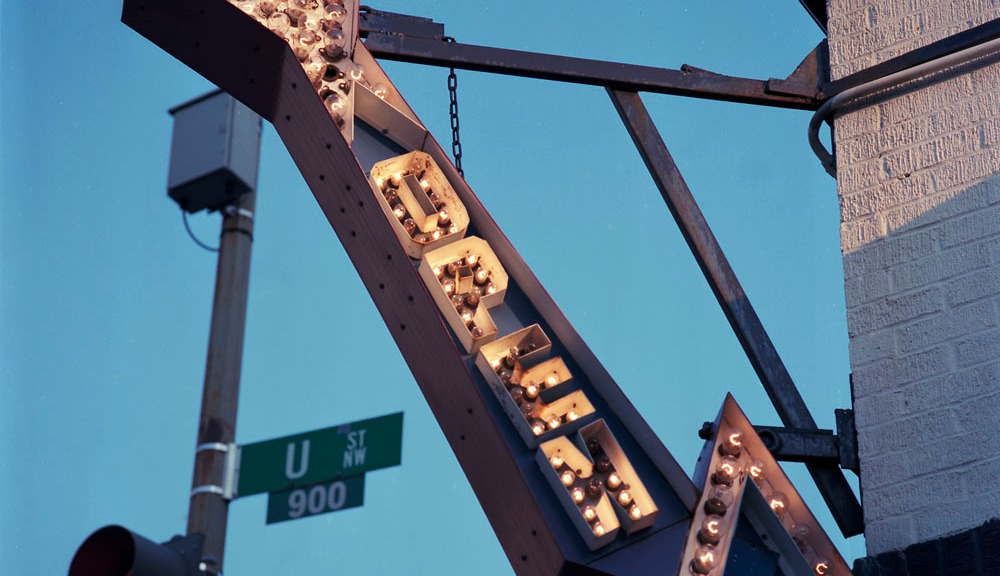 The “Quiet Zone” sign is somewhat ironic, as it is on the edge of the George Washington University campus and three blocks from the GWU Hospital. It does seem to work, at least when I’m in the area, as I don’t see roving hordes of GW undergrads partying it up on the street, but it of course has zero impact on the ambulance sirens.

The “Open” arrow is outside Nellie’s Sports Bar, the first gay sports bar perhaps anywhere. What is a gay sports bar? Well, it’s a gay bar that has lots of very large flatscreen TVs, all of which are tuned to various flavors of ESPN, and it actually sponsors a number of teams in various gay sports leagues around the city. The “Open” arrow is a found object they re-purposed and fixed up to put outside the bar.

This is the sign for the Backbar, part of the famous 9:30 Club. The 9:30 Club is a major rock-n-roll venue and has been around since 1980. It used to be located much further downtown, at something like 9th and F streets, but maybe 15 years ago moved to the current location which is roughly 9th and V Streets. They host major acts for a “small” venue – Billy Idol, Jimmy Somerville are two I can remember off the top of my head.

This is, believe it or not, a brand new building in my neighborhood, with obscenely priced (although I’m sure very beautiful) condos. The rusted steel on the outside is intentional. It’s called the Atlantic Plumbing building because it occupies the former site of Atlantic Plumbing Supply. Late evening sun illuminates it perfectly, pushing the strong lines of the rusted steel and glass into deep relief.

Now THERE’S a phrase you wouldn’t normally expect to read, with the possible exception of the “Local Crime” section of the Washington Post. But it’s true. The Kennedy Center, like so many other cultural institutions, is having a hard time attracting young audiences. In a bid to outreach, they set up a skate park on the front terrace and invited local skateboarders to come and perform, and tossed in a stage for live bands.

This was one instance (of many) where having my Rolleiflex was a huge advantage. It gave me an entree to talk to the skaters and ask for portraits. Everyone loved the camera and if I asked, they posed willingly. On the few action shots I took, it also helped by having no mirror blackout at the moment of exposure, so I could see exactly when I was pressing the shutter button, like in this shot above.

I initially approached the asian skater about taking his picture. He pulled in his friends and all of them posed together. I was surprised at how willing they were to pose, as I mostly shoot candid street photos and people don’t always appreciate that. I don’t know what it was about that day but everyone was just so natural in their posing, it all worked out so well and I didn’t have to direct anyone.

This was a fun shot to take, as I was anticipating this kind of motion blur, but couldn’t know what exactly to expect because the eye doesn’t see motion blur at 1/30th of a second. But I knew I got the skateboarder in the right place.

This girl was working the lights at the event. She saw my camera and asked about it, so we chatted for a couple of minutes about the event, the folks skating, and the weather (it was scorching hot that day, and inside the light tent had to be even hotter). I asked for her picture and she immediately said yes, and even suggested the backdrop instead of inside the lighting tent.

The kid in the white shirt saw my Rollei, and asked some questions about it, and was very excited by it. Again, I asked for a photo before he started his next run, and he pulled his buddy over, they wrapped their arms around each other, and posed. All on their own, no direction from me. I was very chuffed to see how the shot turned out, as I was shooting on the run as it were – one of the docents for the event had earlier shooed me off from the spot where I was standing to take the picture because it was in the path of potentially out-of-control skateboards.