Another series/theme in my still life project is glass and light – both reflected and transmitted.

Trio Mexicano is a very literal treatment of glass bottles. It’s about form and shape, and is easy to interpret. We know what we’re seeing.

Shadows of Glass is a first attempt at a concept- I want to project the shadows of glass bottles in varying arrangements onto seamless paper and then photograph the resulting projection. I’m working on building a suspension frame that will let me be more free in the arrangement and layering of the bottles. For now, I’m somewhat limited by having to support them on a table, so my compositions are constrained by how I can group and position them.

Two very similar shots of the same building. One in soft, diffuse light, the other in strong directional light. While both are about repetition of shapes and patterns, the one remains representational, the other, abstract.

And the difference between these two shots is about two hours. They were taken on different, but weather-wise similar, days, but one was taken around 4pm, the other around 6pm.

Well, it’s not a Chinese wall, obviously, but it is a wall. And a natural phenomenon, light reflected on the wall filtered by the patterns of tree branches, ends up looking LIKE Chinese characters. They’re obviously not real Chinese characters, but they have a very calligraphic feel to them. 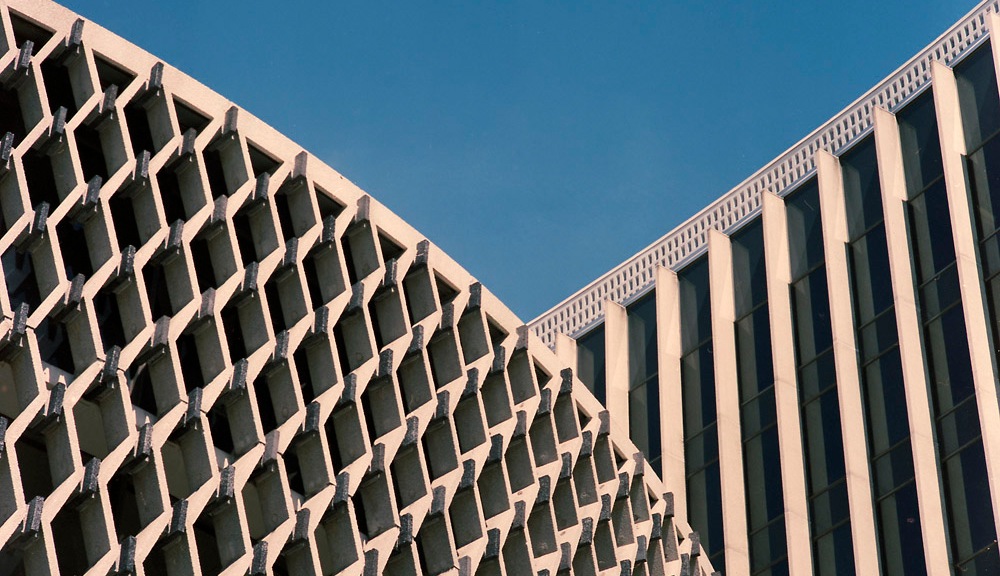 I’ve been photographing the World Health Organization building in black and white, regularly, because the architecture lends itself so very nicely to geometric abstracts. Here it is in color, to show a different take on photo abstraction and the creation of meaning in an image.

The building itself was designed by Uruguayan architect Roman Fresnedo Siri. In 1961, Siri won an international design competition with his arc and cylinder concept. Construction was begun in 1963 and the building opened officially on September 27, 1965. There are bronze plaques on the face of the tower representing each of the 29 member nations.

A recap of the World Health Organization images I’ve made. There are more coming, but they’re on several rolls I haven’t had a chance to process yet (I’ve got to get a couple more shot to run a batch).

This first one is in some ways the most graphic of the bunch, if not the most abstract. In winter, near sundown, you can see this bare tree in front of the white marble wall on the end of the building. There’s the contrast between the black organic shape of the tree against the white rectilinear grid of the wall.

Two different takes on the WHO building downtown DC. This time shot in bright, strong, contrasty sunlight. Due to the geometry of the building I was aiming for geometric abstractions, composing so the context of the structure was absent and what is visible has to be taken non-literally.

Pointing the camera vertically to create these images really pushes the perception into unreality – you’re dealing with three texture sets, not anything particularly identifiable. Mid-century architecture like this is a rare commodity in DC – most buildings are either glass-and-steel cubes, neoclassical faux-palaces, or Art Deco boxes of varying degrees of interest and value, so this really stands out.

I’ve always loved buildings, since I was a little kid. I was fascinated by castles and old buildings of all kinds (I grew up in a house that predated the Civil War in a town that was burned by the Confederates). Now, I’m equally fascinated by modern urbanity. Here’s some of my take on super urban Toronto.

I like black and white for architecture, especially modern glass and steel architecture, because it amplifies the abstraction of geometry found in modern design.

A street car emerges from the shadows of the urban canyon carved between high rise office towers. Pedestrians become silhouettes in the early morning light. An early Sunday morning in downtown Toronto:

A modern condo building rises above the traditional Victorian and Edwardian streetscape of the city center. Taxis fill the street below in the hustle and bustle of the human beehive of activity, while overhead power lines for streetcars divide the sky into grids:

The CN Tower soars above downtown, framed by other towers. The sweeping roofline of the concert hall below directs the eye to the CN Tower from any angle:

Modern apartments frame an industrial-era chimney in a contrast of textures:

Two street lamps crane forward into the scene in zoomorphic curves, the necks and heads of two flamingos, breaking the chaotic geometry of the polygonal tower behind them:

Looking straight up, towers and street lamps criss-cross the sky:

Mirrored windows of one tower reflect upon another, as vertical lines converge out of frame: